Navigate thru all the sub categories of the website

Osler...The Early Years and the One Room School House, 1999, edited by J.G. Guenter, Houghton Boston Press, Saskatoon. 525 pp.
"This new book is published by the Osler Heritage Committee to preserve the history of the early pioneers, the Town of Osler, and the Osler School. This book gives a record of the people, past and present, who have contributed to the settlement and progress of Osler"
The following Osler History web pages were researched and put together by Nathan Ginther and Adam Taylor, both students at Valley Christian Academy of Osler. Both are involved in web page design through their "Sunstorm Enterprises". They can be reached by email at coramdeo2@juno.com.

Osler was founded in the 1890's. Built along the historic Qu'Appelle, Long Lake and Saskatchewan Railroad, Osler quickly grew and flourished. The railroad, with surveying starting in 1890, was built by the engineering firm of Osler, Hammond and Nanton. In 1892 the station house was built and was used not only as a train station, but also supplied living quarters for the station agents. Soon the Village of Osler, named for surveying engineer Edmund Osler, came into existence (circa 1901), and became one of many towns and villages to spring up along the new railroad. The railroad station (left) eventually fell into disuse and was demolished by Canadian National Railway in 1973.
Osler officially became a village on April 9, 1904, and stayed a village until May 1, 1918, when it became a Hamlet. Then, in 1949 it was upgraded to organized Hamlet status. Osler became a village for a second time in 1968, and was officially designated Town of Osler in 1985.
Osler developed quickly early on, and in 1903 it had a grain elevator, five stores, and a lumber yard. More and more people moved into the town, and houses sprang up. The close proximity to the new railroad helped the town to flourish and expand quickly. By the 1920's 3 grain elevators lined the railway. Bringing in supplies, business, and people, the railway and elevators were the heart of the town.

In the early 1900's, Mr. Isaac Loewen built and operated General Store #1. In 1904, Mr. Peter Woelk opened up a furniture store, to be followed 9 years later by Mr. Gerhard Bergen, who owned and operated a store which was later to become the Post Office. In 1909, lots were selling for $10.00, and the municipal taxes were only $0.60 per year. In 1941, General Store #1 received some competition when General Store #2 was built. Sold to Jim Thiessen soon thereafter, it was closed permanently so he could build a house. Also in 1941, the Co-Op Company bought General Store #1, and converted it into a Co-Op store. The store changed hands several more times, and is now known as the Osler General Store once again. The store expanded in 1999, a new store building built in addition to the old one. 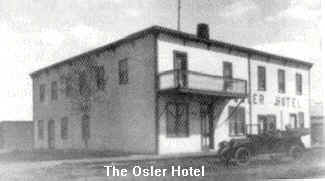 The Osler Hotel was in service for several years, and in it's time provided lodging for many railroad workers. Owned and operated by Sam Smith along with Mr. & Mrs. Olson, it housed a bar on the bottom floor. In 1914, the churches of the town took action to "banish the bar" as a response to the brawls that were a common occurrence.
The Osler Post Office came into service in 1913. First owned and operated by Mr. & Mrs. Gerhard Bergen, it remained such until 1916, when it was bought by Mr. & Mrs. H.J. Dyck. They combined the post office with a store, which he operated for a few years before leaving the store and just managing the post office, where he remained for 26 years. In 1942, the Osler Rural Telephone Co. was founded, and a telephone line was built. A switchboard was installed in the post office to control the calls of the 25 rural and 9 urban subscribers. In 1944, Betty Saunderson came to work at the post office and to control the switchboard. She moved away in 1946 and was replaced by Mary Hein, who served in this position until 1949, when Betty Saunderson returned to her original position. Her husband Ike held the position of postmaster until 1975, when he was replaced by his wife Betty. Betty Dyck (Saunderson) was the postmaster until she retired in 1991 giving the position to M & M Grocery Store owners Mr. and Mrs. George Unruh. Mr. and Mrs. Unruh sold the General Store in 2009.
As the town grew, and more people moved in, there came a greater need for utilities. During the Second World War, power was brought into the RCAF practice landing field, which was built east of Osler. Later in 1944, a group of citizens convinced the Saskatchewan Power Corporation that a line could be easily run to the town. Soon the oil and gas lamps, along with their daily maintenance, were outdated and a thing of the past. The next important service to arrive in the town was a natural gas distribution system, and this was a tremendous improvement. Cisterns were still necessary for the townsfolk, and water needed to be hauled in. In 1978, a water plant was built in Saskatoon, and a pipe laid to Osler, eliminating the need for cisterns and water hauling. Before long, the decision was made to put in a plastic sewer line. Eventually the system became obsolete, and was replaced in 1991 with a conventional sewer and lagoon system.
Many of the first inhabitants of Osler were both Mennonites and Christians. As a result, the town reached a decision to build the Osler Mennonite Church. The Rural Municipality of Warman donated twenty lots to be used for the church yard and an adjacent cemetery. The total cost of the new church, dedicated on September 9, 1928, was $8,800. It was the only church in town until the Osler Mission Chapel was built in 1976. The Osler Community church was completed in 1993, and dedicated at Easter of that year. All of the town churches have active memberships, ladies groups, and youth groups.
The Osler grain elevators have been town landmarks since their construction in 1905. Used for decades, the first elevator was torn down in the early 1980's. A second elevator was torn down after it was severely damaged in a windstorm in July of 1996. The third elevator lasted a few years longer, until it was torn down on April 28, 1999. The picture below is a mid-fall photograph of the 1914 Pioneer elevator. 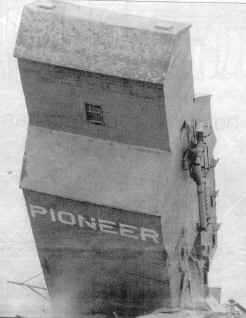 Tell Us What You Think

Would you like to receive regular updates via email about news and events from the Town of Osler?

Fires may start easily and spread quickly but there will be minimal involvement of deeper fuel layers or larger fuels.